Menu
Reminder - You should now be accessing Home Learning Work from the Home Learning tab in the Children Section. Please take care and keep safe.

In Science, the children will be exploring light sources and that darkness is the absence of light. They will investigate that light travels in straight lines and whether light passes through transparent, translucent and opaque materials. They will explore reflective surfaces and begin to research how the eye helps us to see.

In Computing, children will explore how TV and films use a green screen background and they will be transferring the advertisements they create in Literacy to the big screen! They will use imovie software to film and edit their videos before rewatching themselves back!

In Geography, children will be exploring the 8 point compass and identifying the Geography of different regions of the UK, with a link to popular TV programmes!

In Art, they will explore Andy Warhol and the Pop Art genre. They will apply his use of screen printing to create their own pop art themed artwork using light sources as an influence. They will learn to carve lino and use their carving for their printing.

In Music, we will explore the effect of soundtracks in film and how music can create the appropriate atmosphere for the viewers. Children will explore the film music composer, Danny Elfman, and create their own music to accompany a scene from one of his films, Beetlejuice! 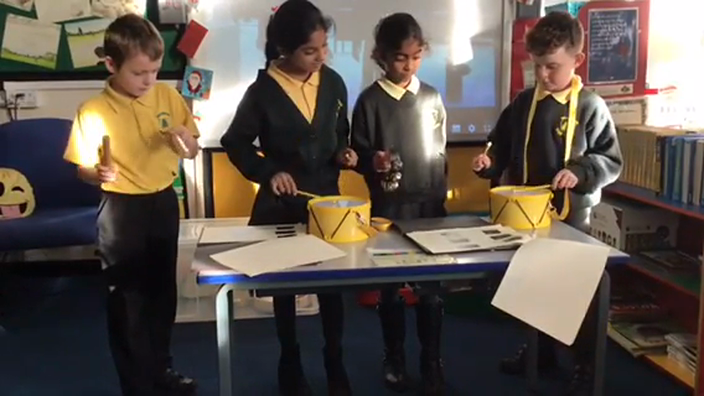 We listened to film soundtracks composed by Danny Elfman. We watched a scene from Charlie and the Chocolate Factory then composed and played the music to accompany the action.
Top
Cookie information
Cookie Notice